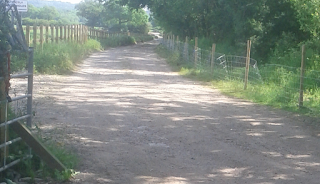 On Tuesday evening I walked FP20. The gate blockages had been removed and the barbed wire fence had been almost completely replaced with short open link fencing. The stiles remained as did the "FOOTPATH CLOSED" notices. The situation was still not satisfactory but did represent a step in the right direction. I filed a response with the Bordon Herald to last week's front page article.

Unfortunately, sometime during Tuesday night/Wednesday morning, someone vandalised the new fence by cutting it at frequent intervals.

When the barbed wire fence was cut I thought that one possibility was that it had been cut to provide an excuse to close the footpath but that explanation doesn't really make sense this time round.

Rory McCarthy the landowner has been talking of keeping pigs or sheep in the field next to FP20. If true then the new fence, though unnecessary and in the wrong place, represents an attempt on his part to improve the situation. Even if not true, cutting the fence does not improve the situation and will serve only to anger Rory.

What do we want to achieve? We want the land to be what it should be, Hampshire open countryside; farmed rather than fallow or developed; accessible to all.

How are we to achieve that? Let's start by simply asking. I'm sure that by now Mr McCarthy is well aware of the strength of feeling about the local rights of way. So far his attitude hasn't been one of making friends and influencing people but everyone deserves a second chance.

Will that work? I don't know. I do know he was quick to inform the Bordon Herald of Tuesday night's vandalism so that's one channel he pays attention to.

On 24th April everyone behaved as they should, let's please keep it that way.