The church of St Nicholas 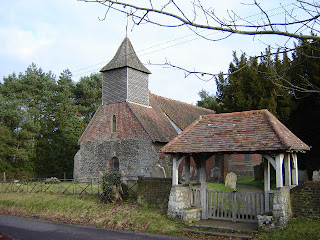 
The Kingsley chapel was used by the royalty while hunting, but a reference to it does not appear in Pope Nicholas's taxation of 1291, though mention is made to 'the parish of Kingsley' in deals of 1293. Foresters were also using the chapel, which was subsidiary to Alton's St Lawrence, as a grant of 1334 mentions 'Aulton and the Kingsley church'.

Kingsley church belonged to Hyde Abbey, near Winchester, and the abbey monks supplied a chaplain for it. The field behind nearby cottages is still called Marks Field, and indeed one of the cottages was believed to have been occupied by a priest.

The parish register began in 1568, though no originals survive. Obviously the church had fallen into disrepair by the early 18th century, as more and more items of expense on church refurbishment were noted. In 1778, a major restoration had to be undertaken which involved rebuilding of the nave and the wooden upper tower.

The west wall, beneath the bell tower, is built of courses of deep purple heathstone, while the east wall is all that is left of the older church, being constructed of 'clunch' (chalk) which has been plastered. This wall has a window of two trefoiled lights, circa 1330, containing modern stained glass by the artist Geoffrey Webb, installed in 1949 as a memorial window.

Decoratively, the interior of the church is simple, but does contain several interesting items. Near the main door is a tub font, possibly 11th century, which has an 18th century metalwork cover of intricate design. It stands on a very old stone floor. A wooden chest, from about AD 1300, is believed to have been placed in the church by order of the Pope, who was raising money for the Crusades at the time. Unfortunately it was removed by thieves late in 1993.

The Mortuary Crib, possibly made from communion rails, is a very unusual feature, dating from the 1790s, the same age as the pews. Soon after these were installed, Jason Harding, a local carpenter, built the gallery.

When a new church was built on the main road to accommodate the villagers of Kingsley and Oakhanger, the old church ceased to be used regularly for services, though burials continue. Declared redundant in 1975, the building is now cared for by Kingsley Parish Council and The Friends of St Nicholas (FOSN), and has been restored for use as a burial chapel.