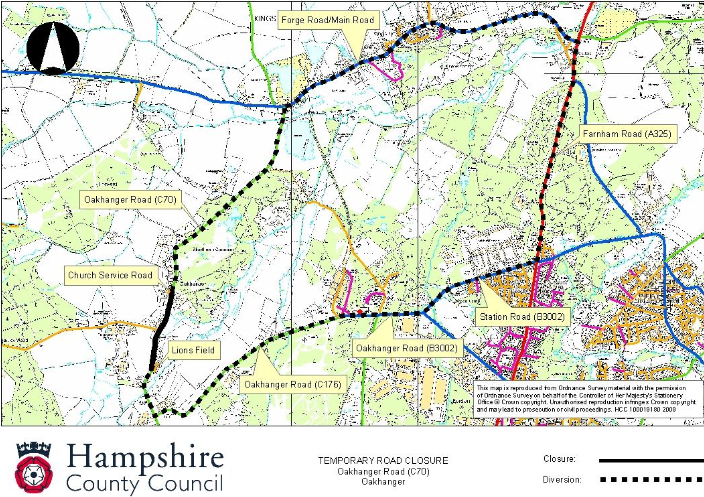 NOTICE IS HEREBY GIVEN that Hampshire County Council proposes to make an order to allow South East Water to execute a new mains connection.

DURATION OF ORDER: From 25th August 2014 for a period of 3 months or until completion of the works whichever is sooner.  (Notwithstanding, it is expected that the closure will be required for no longer than 4 days.)

Reasonable facilities will be provided to allow access to adjacent premises while the work is being carried out.

NOTICE IS HEREBY GIVEN that Hampshire County Council intends to make an order to allow highway maintenance works to be executed.

ROAD TO BE CLOSED: that part of The Straits, Kingsley between its junction with Sickles Lane and its junction Binsted Road.

DURATION OF ORDER: From 5th September 2014 for a period of 1 year or until completion of the works whichever is sooner.  (Notwithstanding, it is expected that the closure will be required for no longer than 3 days between 8.30 am and 4.30 pm.)

Reasonable facilities will be provided to allow access to adjacent premises while the work is being carried out.

Hugh or Hughie as we called him was one of the Withers boys and he lived with the family in number 6 Goldhill. Hughie would have been, probably, a couple of years or so older than me. Of course he was a village boy the same as the rest of us and as with most of the village boys at that time, he was keen on fishing. The village pond was, at that time, available to fish without restriction or Army interference. I suppose the War Department, as it was then, had other things upon their minds. In any event the pond was fished extensively. Local boys spent long periods there and people came from around the area. By and large it was boys who fished there but occasionally an adult would come to fish. Indeed, I remember meeting a Mr. Wilmot from Petersfield one day. He was not only a keen angler but also a sergeant in the Hampshire Police at Petersfield. So, the pond was a popular fishing spot for many of us, as was the river beyond the common towards the Camp. The river provided some very good trout fishing in those days and like most rivers was kept clean and dredged by the River Authority of the day. Readers will no doubt recall last year's flooding and the many calls for dredging to resume in the rivers of Somerset. Why dredging in general was stopped I have no idea, I suspect it probably has something to do with money and profit. As with most of our services of yesteryear the great god money has taken over and actual service counts for very little as long as a few quid can be made.

But, the river was dredged and tracked cranes would progress along its banks digging out silt and vegetation. This had the benefit of keeping it reasonably weed free and free flowing, although, it is true to say that I well remember some years when it overflowed into the surrounding meadows.

So, in the times of which I write the river supported a large number of fish and at the top of the table were the wild brown trout other species included minnows, sticklebacks, loach, bullheads and the fresh water lamprey.

What has all this to do with Hughie Withers, well it all has to do with the methods employed to catch the fish, or more exactly, the trout. For the most part, indeed, as far as I am aware exclusively, the methods used were linked to floats or ledger or occasionally live bating. These were, if you like, the choices of the average villager and were used to catch all species including the trout. Trout, are as most people will be aware, classed as game fish and attitudes towards them in the angling fraternity have always differed to those of coarse fish. It was never quite the thing to attempt to take trout on a worm or live bait, both perfectly efficient ways of catching the fish, as indeed was spinning for them. I am fairly sure that the practice of live baiting has long been outlawed and can no longer be used.

So, as with many branches of field sports, there was a clear divide between "them" and "us" and an element of inbuilt snobbery existed. On all of the chalk streams and better trout waters, the cost of fishing ensured that village people, boys in particular, could not have afforded to fish for trout. This was very much the prerogative of the wealthy and the methods they used reflected the superiority of the sport. The noble trout should be caught on a fly. The purists among the trout fishing community would also argue strongly that only the dry fly was sporting, the wet version not quite being cricket in you follow my drift.

Back to Hughie, Hughie decided that he was going to catch trout on a fly. This was by no means an easy option, not least because of the cost involved. The fishing in the river itself did not involve cost but most certainly the tackle used to do so did. Tackle for trout fishing, as with anything considered to be a bit exclusive, always goes to ensure and extra cost being placed upon the necessary equipment. The fly rod was then usually made of split cane, the lines are specialist as they have to be able transport a delicate fly and gently deposit upon the waters surface, flies were then hand made and cost more than your average bait. The art of presenting a fly is by no means an easy one and takes quite a bit of practice to get it right. Get it wrong and the chances of catching a trout are zero. There are, and always have been,those who make a handsome living from providing casting tuition but that would have been out of the question for a Kingsley school boy in those days. It still costs a huge amount of money today so things haven’t changed that much. It was, then, against such odds that Hughie took up fly fishing for trout. How he achieved it I know not, perhaps he got hold of a book or perhaps he did it by sheer trial and error, but achieve it he did. Not only did he catch a healthy number of good sized fish, he also mastered the art of tying his own flies. I never managed to go out with him on one of his fishing trips but I often saw him casting away from a distance. He was happy to talk about the fish he caught and how he had done so but he seemed to prefer to do so in his own company. This, for me, created a certain mystery and I had immense admiration for his skill in achieving such an unlikely ability and, as far as I am aware by his own endeavours. I hope, in the course of his life, he one day got the chance to use his skills on one of the great trout waters, he deserved to do so.
Posted by Derek Yeomans at 10:32 No comments:

NOTICE IS HEREBY GIVEN that Hampshire County Council is making an order for safety reasons in connection with the Jalsa Salana event, as follows:

DURATION OF ORDER: from 18th August 2013 for a period of 1 month. (Notwithstanding, it is expected that the speed restriction will be required for no longer than the period of the event during which time it  will be in force 24 hrs per day.)

Details may be viewed at: www.hants.gov.uk/publicnotices.  If you have any queries regarding the above please contact Hampshire County Council, Highways Department on 0845 603 5633

STUART JARVIS Director of Economy, Transport & the Environment, The Castle, Winchester, SO23 8UD

In a boost for local democracy and the independent free press, councils in England were brought into the 21st century today (6 August 2014) after Local Government Secretary, Eric Pickles, signed a Parliamentary order allowing press and public to film and digitally report from all public meetings of local government bodies. This ‘right to report’ updates a law passed by Margaret Thatcher as a backbench MP.

This new law builds on Margaret Thatcher’s successful Private Members’ Bill from 1960 which allowed for the written reporting of council meetings by the press. The new rules will apply to all public meetings, including town and parish councils and fire and rescue authorities.

The Plain English guide to the new rules is here.
Posted by Bob at 17:39 No comments:

I hope you have been enjoying the long hot summer, which is supposed to continue for some while yet to come. Now I’ve said that out loud, you can guarantee we’ll be reaching for the wellies in days!

During periods of warm weather it is tempting to leave doors and windows open but please remember that insecure properties are an invitation for intruders. Most burglars are opportunists who do not plan their crimes but constantly look for an easy chance to enter a property – either your home, or your office - through a door or window that has been left open.

In a recent incident, a youth walked into the home of an elderly lady through the open front door while she was outside in her garden. The man stole the victim’s purse before calmly walking back out of the house.  As he was leaving, he was seen by the pensioner and said that he was in her home because he wanted a glass of water!

A burglar doesn’t really want to go to the effort of forcing doors and windows and rarely needs to.  When going out, securely lock all doors and windows – no matter what the temperature and no matter how long you intend to be away. 'Just popping across the road for a minute' is ample time for a criminal to strike. If you are working or relaxing in the back garden make sure that the windows and doors which you cannot see are securely closed.

Remember - do be a nosey neighbour! Tell the Police or Crimestoppers if you see anyone acting suspiciously in your neighbourhood, and if possible, take the registration numbers of any unusual vehicles in the area.

Unfortunately the warm weather also leads to an increase in anti-social behaviour, albeit sometimes unintentional. Please remember how far your voices/music etc will carry on a long hot summer evening. Your neighbours at the other end of the street might not appreciate your choice of barbecue music! That said, please also try to be tolerant. Your neighbour’s party may be irritating (especially if you weren’t invited!) but if it is only once a year, just bear in mind that it will soon be over.

Remember, Hampshire really is a great place to live and work so please don’t have nightmares (I think someone once said!). However we can all do our bit to make our communities an even better place to be. Please call Crimestoppers on 0800 555111 if you have information about ANY crime. Your call is free and no one will know you called. Alternatively, you can give information anonymously on line at www.crimestoppers-uk.org where you can also see images of people the Police would like a word with. You will also find me on Twitter at @HantsCrimestopp