About 30 villagers and ramblers and several dogs completed the walk last evening from Upper Green, along footpath 20 and back via footpath 27 and the B3004 to Upper Green.

We gathered on Upper Green shortly before 7pm for a briefing and were photographed as a group for the local newspaper. The briefing was that we were simply going to assert our right of access. We didn't expect any confrontation with the landowner, Rory McCarthy who lives in the nearby Wheatley Oast, or any of his "land managers"; we weren't going to tear down fences or damage stiles but if anyone tried to block our way, we would call the police.

We were greatly encouraged to learn that Hampshire County Council has now written to the landowner instructing him to remove the barbed wire, the stiles and the notices as well as unlocking the gate and refraining from all further acts of intimidation towards footpath users.

Setting off along Sickles Lane we were joined by a local resident using a mobility scooter. On arrival at FP20, the mobility scooter had to leave us as further access would be impossible. The rest of us climbed over the gate, under the fence or walked through the narrow gap on the far side of the track. 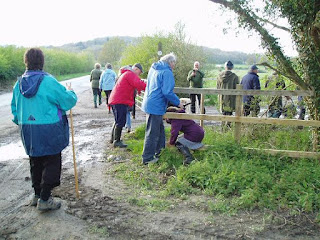 With some walking inside the barbed wire and some along the track itself, where everyone used to walk before the barbed wire was erected, we were able to appreciate the contrast between the beauty of the open countryside and the sheer ugliness of the fencing. 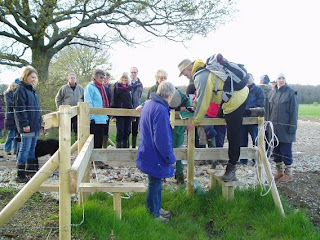 Crossing the pointless stiles gave us plenty of opportunity to realise that Mr McCarthy isn't a man to employ fine craftsmen either.

Footpath 27 runs along the edge of open fields. McCarthy's land extends some 100 yards from its junction with footpath 20. The 100 yards is enclosed with barbed wire and terminated with a stile after which the path simply continues across open land. What a stupid act of vandalism!

Footpath 27 extends the other way for 200 yards or so to the woods just past the "hay storage barn" where he keeps his airplane. That way is also blighted with pointless barbed wire and jerry built stiles.

Once off McCarthy land the walk became what all walks in the countryside should be, pleasant.