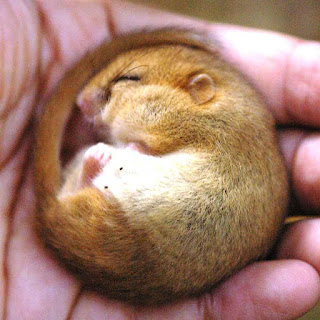 Woodland Trust, that is about to become three. However, as a result of my connection with the two original woods I began to consider if they held Dormouse populations. It would appear that no formal surveys had been conducted by the Trust. The more I thought about it, and became more familiar with the woods, the more convinced I became that there must be Dormice within each of the two woods. I had not seen a Dormouse since childhood, that’s a long time, and things have changed considerably over the years. The Dormouse is now listed as an endangered species and is fully protected under law. Both British and E.U. Law. It must not be disturbed, injured or killed and it’s habitat must also be protected. All of these matters are overseen by The Peoples Trust for Endangered Species. (P.T.E.S ). They are also the body which collate all info regarding the Dormouse and they keep the National records regarding it. In order to get this information there have to be people who collect it and these people have to have a licence issued by the P.T.E.S.. Having discovered all of the above it became clear to me that I could not just launch into a major search for Dormice in "my" two woods.

I also discovered that there are a number of establishments where courses regarding Dormouse conservation and management are conducted. The Woodland Trust happily paid for me to attend one such course held near Exeter early last year. This proved to be a delight and, as a result of the on course survey, I saw my first Dormouse, actually several, for many a year.

As a result of all of the above I am now working towards my own licence. This involves going on surveys held by other licence holders and being trained in the techniques used to survey and record Dormice without causing harm to them. I have now been involved in many. As surveying does not take place during the winter months, ( the Dormice hibernate), the new season has just begun. On my first survey this year, in the first box we opened, we found a torpid Dormouse. We weighed the little creature and replaced it into the box and throughout it remained asleep and completely unaware of what was happening to it. This is not unusual behaviour for Dormice, they often go into a torpid, hibernating like state for short periods of time during the summer months.

In woodlands where Dormice are monitored boxes are put up in order that the Dormice can use them, not least to breed in. The Dormice do not use these boxes to hibernate in. They use a location which is on or very close to the ground as they need moisture in order that they do not dehydrate during the long period of hibernation. The boxes used for Dormice are basically a reverse design of an average bird box.The entrance hole is placed facing the tree trunk and the roof slopes away from the tree. The roof is wired on to the base of the box which prevents it falling off or being removed by squirrels. The whole structure is them strapped to the tree trunk at a height of about six feet. When surveying, the box lid is eased carefully to one side to permit observation of the inside. Carefully it has to be as Dormice are nothing if not agile and fast. A careless surveyor will be lucky to see the back end of the Dormouse as it disappears high into the trees if a box is opened without great care. Last season on one occasion a lad,who was new to Dormouse surveying, unfortunately opened up a box without due care only to be amazed, and completely embarrassed, when from within the box a family of mum and about five little Dormice exploded all over his arms and shoulders as they scampered hell for leather into the upper branches of the tree. He will never make that mistake again !

Part two next month.
Posted by Derek Yeomans at 11:01

Email ThisBlogThis!Share to TwitterShare to FacebookShare to Pinterest
Labels: Environment